The Man Behind the Name... 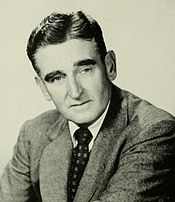 It was in the 1920's when John Robert Powers came to New York City to pursue an acting career. One day, he needed to gather a group of attractive people for a magazine advertisement not knowing that it would pave the way for what today is a billion dollar modeling industry.

He founded the first modeling agency in 1923. Soon afterwards, he opened the doors to the first personality development school and created a curriculum that was to be the core for executive skills, modeling, acting and social skills. These courses are offered worldwide through the John Robert Powers Schools.

Powers believed that there was no such thing as an unattractive person, only people who did not know how to make the most of themselves. Naturalness was his gospel. He encourages his female students to "make down, instead of make-up". To date, our schools still believe and teach this philosophy. Be yourself. Be natural. Be the best you can be because that is what John Robert Powers is all about.

Marking its 97th year in 2020 as the leading personality development provider, the John Robert Powers Schools continue to touch people's lives by empowering them and helping them unleash their full potential. We follow proudly in the footsteps of the man, John Robert Powers.